This is the story of my flying/roadtrip adventure around the western USA in 2014.

I was towing an ultralight aircraft in a trailer behind a camper van,
a really good rig for such an adventure.
Very road and air capable, at low cost.
It's a real high-clearance off-road vehicle! 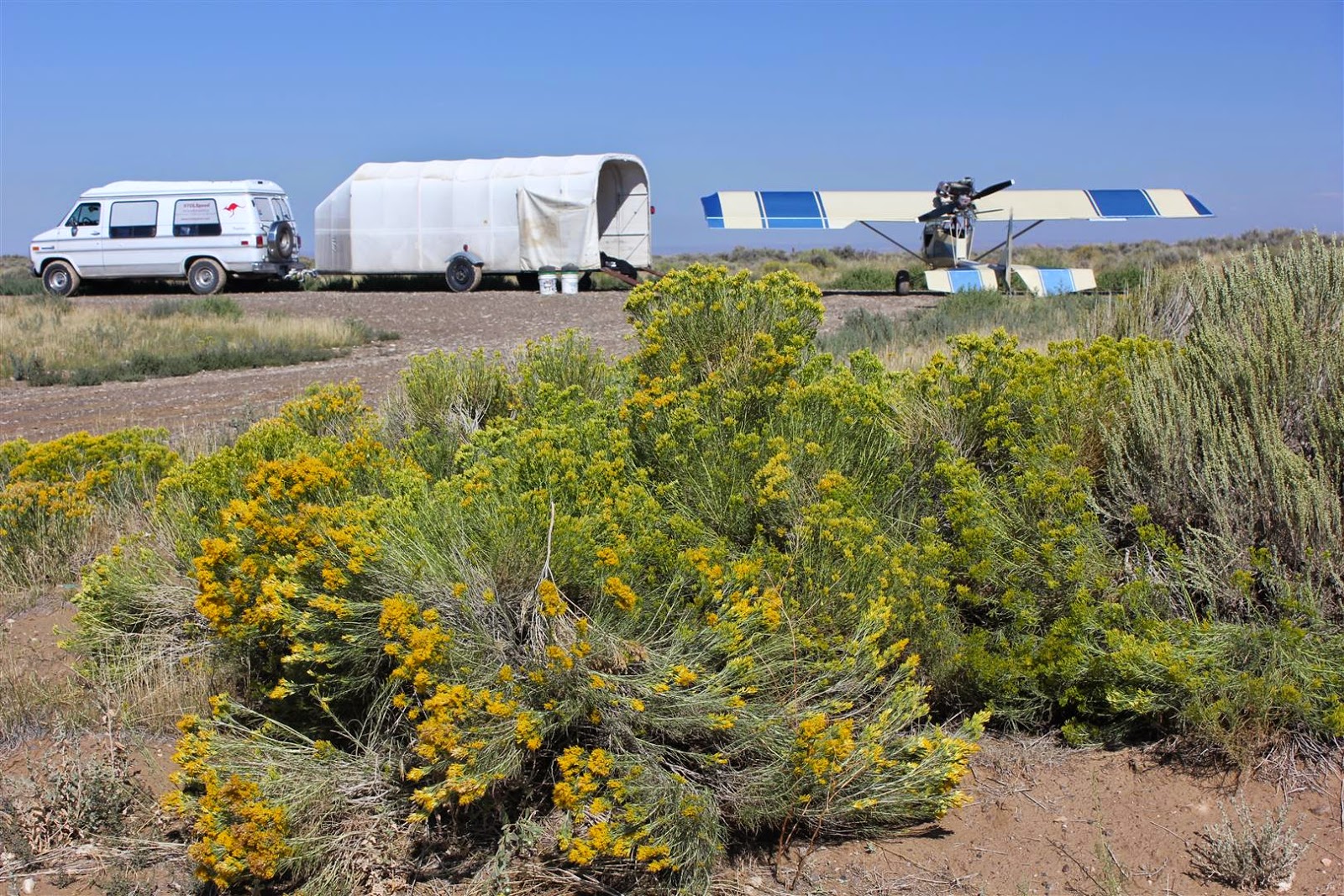 A few notes about this adventure are in order.

I've long wanted to fly the high desert areas in the western USA.  As you'll see, the scenery is spectacular!  High mountains, deep canyons, volcanoes, lava flows, dramatic rock formations, everywhere.  And because this is dry desert country, there are no trees to hide the view.  You'll see lots of rocks in this blog......  I'm also interested in water supply, and power generation, and agriculture, and commerce, and transport, all of which the Americans do in a big way.

While still in Australia, I searched maps and the internet for points of interest, and plotted them on a Google Map.  Then scanned the aviation Sectional Charts for quiet airfields in the areas that I wanted to fly, and plotted them on the Google Map.  By zooming right in I could have a look what the airsfield actually looked like, amazing!  This was the result that I found:

When I wanted to fly a particular feature, I just selected the nearest likely airfield and set up there. I mostly tried to use the unattended airfields, and there are lots of unattended, run-down airfields these days.  Some were open access, just drive in.  Some were surrounded by chain-link fences with locked gates, and then had to call the manager to get the pin code, or sometimes had to find the local sheriff to gain entry.  These quiet airfields were also excellent places to camp.  Usually with toilets, sometimes a pilot's lounge, and pretty safe, because vandals mostly stay away from airfields.  I usually had the place all to myself.  It was all fairly convenient, and worked really well.

These are the 50 airfields that I used on this trip.

This sort of ultralight flying is nothing like the typical Sunday morning ultralight flight around the home ‘patch’, flying just for the thrill of flying….  I’m using the aircraft as an observation platform, for viewing and photographing what I see on the ground.  I like to call this aircraft my ‘high-clearance off-road vehicle’.  I’ve usually identified features that I want to investigate, whether geographical or man-made, from maps or internet, then the aircraft is such an ideal way to get a unique perspective on such features.  Travelling by road only gives the flat roadside view, but from 1000 ft above, that same view becomes spectacular!  This Kolb ultralight is particularly suited for such observation, because sitting right in front gives an unparalleled vista 270 degrees.  It flies slowly and is very stable even when hands-off the controls, which gives time to concentrate on composing the image in the viewfinder.

Every pilot at all times should be watching out for where he/she would land if the engine should quit, but very few really do that because modern aircraft engines, especially when maintained by a professional mechanic, are so reliable, and sitting in a solid, comfortable cockpit gives a feeling of security.  I don’t get the same feeling of security when sitting out in front of a buzzing 2-stroke, maintained by myself…..  If the noise does stop, the aircraft glides really well and lands fairly short, but my feet are the first to arrive and the rest of me is not far behind, and there’s not as much structure for pilot protection as I would like…..  I’ve reinforced that protection as much as I can without a full workshop, but I still feel exposed…..  The engine is a Rotax 503, dual ignition, the best 2-stroke engine ever developed for aircraft use, but still a 2-stroke, with the inherent liability of such a lubrication system.  In the past I’ve flown 1000 hrs in front of a similar engine, with never a failure, but I still can’t really relax when over hazardous terrain.

And here’s the big difference from flying around the home patch where you know the terrain and already have landing sites in mind in case of an emergency.  In this case it’s all new territory to me, and often harsher terrain than I would like to fly over, but it’s the only way to get to the places I want to see.  So I’m forever peering down, trying to assess the landing options down there…..  I always welcome some sort of road or 4WD track, and follow them whenever possible, but I know from experience that it’s always a lot rougher than it looks from up above.  I always keep enough altitude to give time to set up a glide to the best option.  1000-1500 ft above the terrain gives the best panoramic perspective for photography, so I’m usually at that height, or higher if necessary.  I never fly really low just for the thrill of it; that’s a different flying experience that doesn’t suit my purpose at all; it’s high risk and not good for photo ops….  A lot of the photographs I took will look like there’s no decent terrain down there at all, but usually I’m on the edge of the worst and there are better options back behind the camera.  I sometimes have to turn back when I think the risk is too great, and that’s a real disappointment when it happens…..  To see what I want to see, I sometimes have to be bolder than I would like, but I do want to continue to be an older pilot so must be willing to compromise…..

In case I do have to land rough and am stranded, I carry a Spot satellite locator on my person, and a Personal Locator Beacon in the aircraft.  Then I also have a cell phone if there’s signal, and the airband radio to contact passing aircraft.  I carry two hydro packs of water and some granola bars for sustenance.  I also carry a sleeping bag and a space blanket and insect repellent if stranded overnight, and lighters and matches for lighting a fire.  Also a powerful flashlight and a signalling mirror, and know how to use it.  To navigate and avoid controlled or restricted airspace I use a moving map GPS and the local Sectional chart.  …..  I have a Second Chantz ballistic parachute that has just been repacked and a new rocket motor installed, so do have that as an ultimate backup.  So I think I’ve prepared as much as possible for these adventure flights.

What with constantly peering down to assess landing options, finding the features I want to see, maneuvering for the best photo composition, watching out for other aircraft, watching out for restricted airspace, calculating fuel reserves and assessing headwinds to get back to base, let alone flying the aircraft, it’s a busy time up there, in fact quite intense and seldom relaxing…..  The engine and propeller are extremely noisy, to the point of stress even with an automatic noise limiting headset, add to that, freezing early morning air at altitude, and possibly bladder stress, and I sometimes wonder why I do it…..  But of course, you don’t get something for nothing, and in this case the reward is well worth the effort!

I don’t claim to be a photographer, I just try to take good snapshots.  Not interested in artistic photography, just trying to capture the panorama that I see.  I know a bit about the importance of light and composition, and of course it’s easy when the vistas are so grand from up there.  I just use a basic Cannon DSLR, set on auto cause there’s no time to adjust settings in such a moving and rapidly changing situation.  Always use a polaroid filter, maybe too much…..  I’m pretty satisfied with the results, and keep the album running on my screen saver, and re-live the adventure every day……

The Kolb is by far the best folding aircraft available.  The tail folds up easily and the wings fold down and back along the boom tube, so it’s a narrow tidy package.  Takes me about 20 minutes at leisurely pace to unload and unfold, ready to fly, and the same to fold/load again.  Easily done on my own.  It’s a wonderful asset to be able to easily trail the aircraft to different locations and then set up and fly.  So many ultralight flyers are confined to their home field and close surrounds, but I’d get really bored to be confined like that.  To me it’s not enough just to go up and fly around, I need to go somewhere and see something new…..  I’ve travelled around a lot in bigger aircraft, camping under the wing, and it’s a great adventure to be flying out over the horizon for a long trip, but gets really old if stranded by bad weather, with the aircraft tied down outside in the weather, and with no transport to town.  So with this rig it’s really good to travel around with a comfortable bed on wheels, and the aircraft packed safely away in it’s own portable ‘hangar’.  If bad weather is forecast for a week, I just look at the weather map and drive to somewhere better.  The trailer I have is excellent!  It’s narrow enough to be able to see behind when towing, and light enough to be really easy towing, only costs an extra 3mpg.  I hardly know it’s there, even towing with this 20 year-old van. 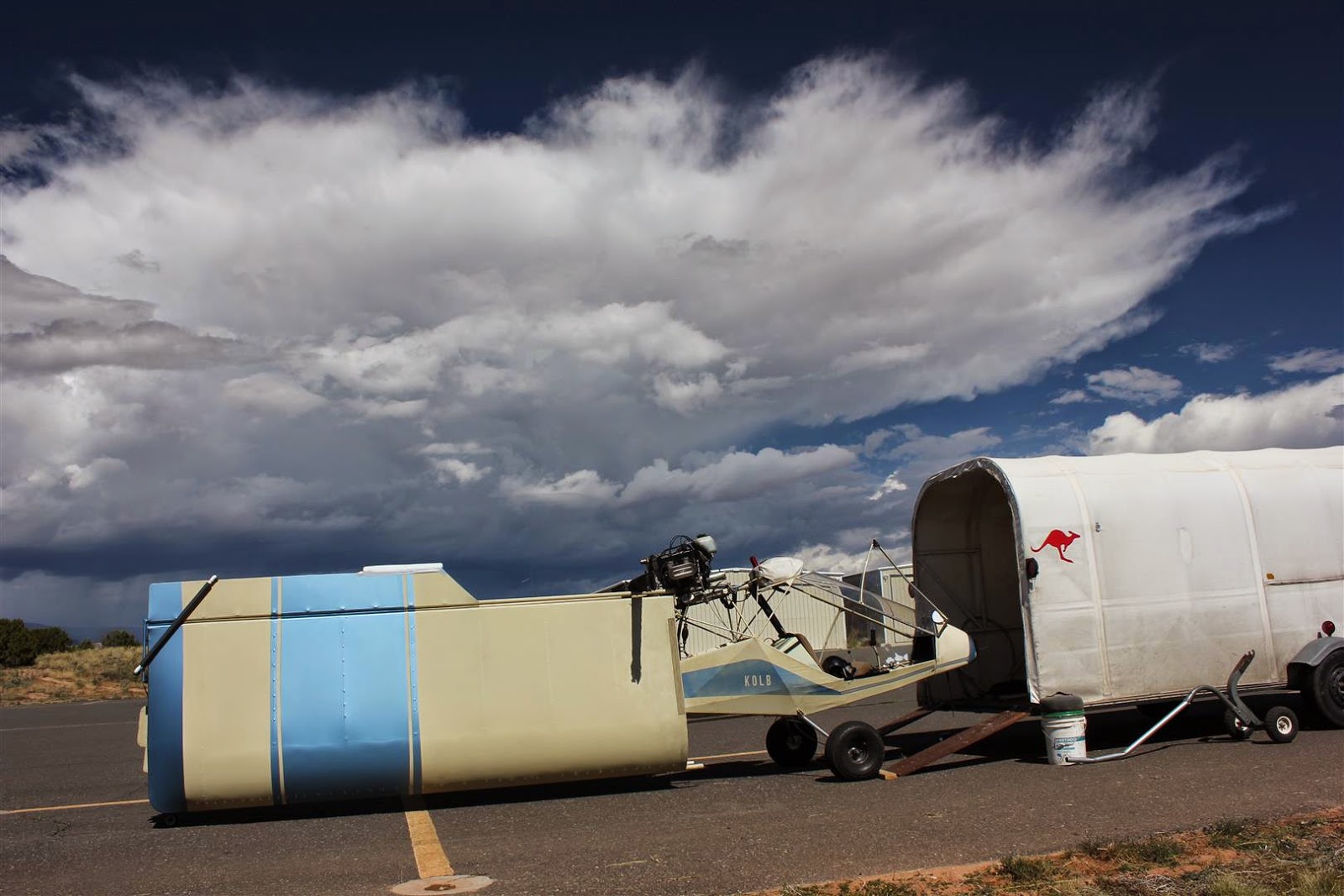 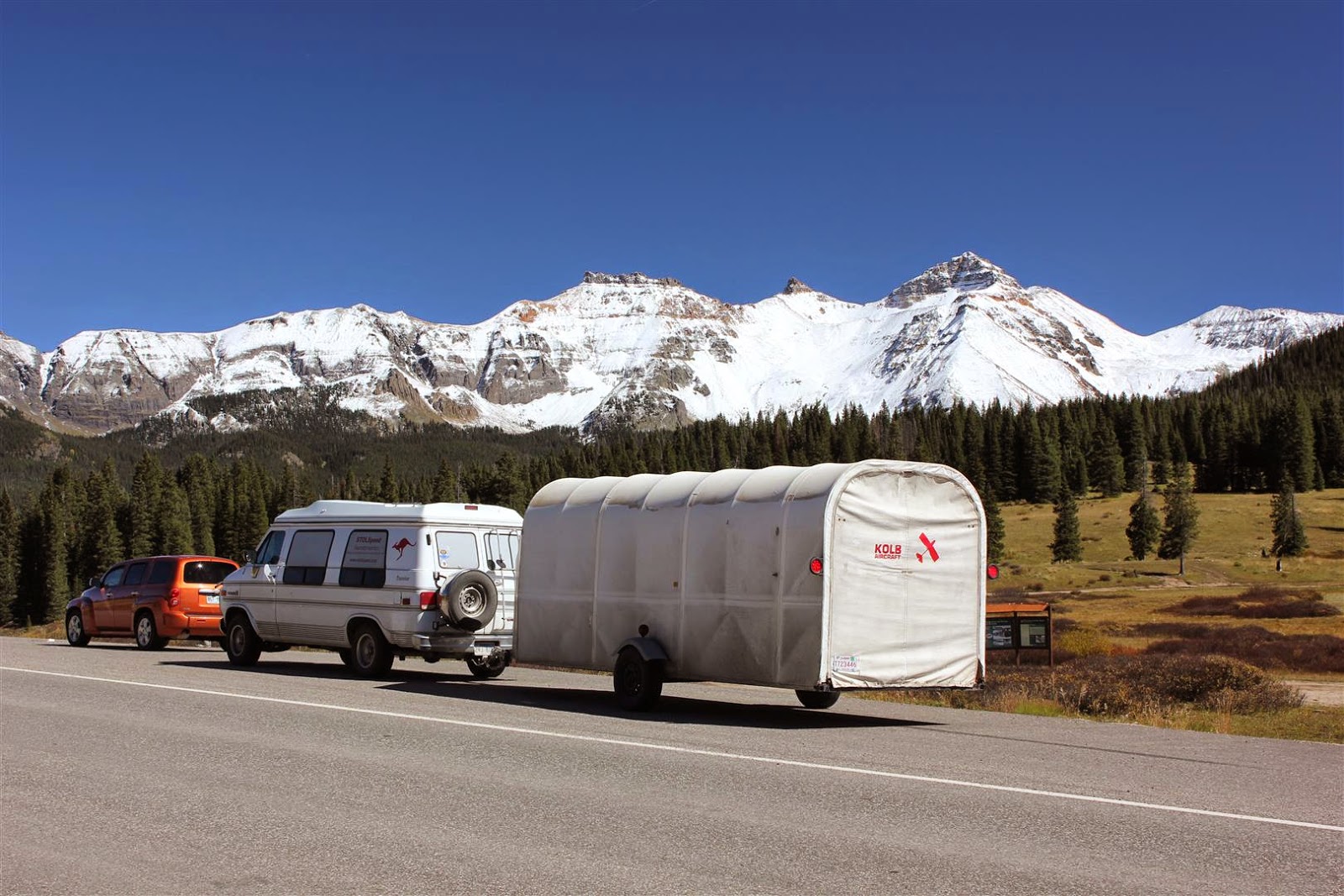 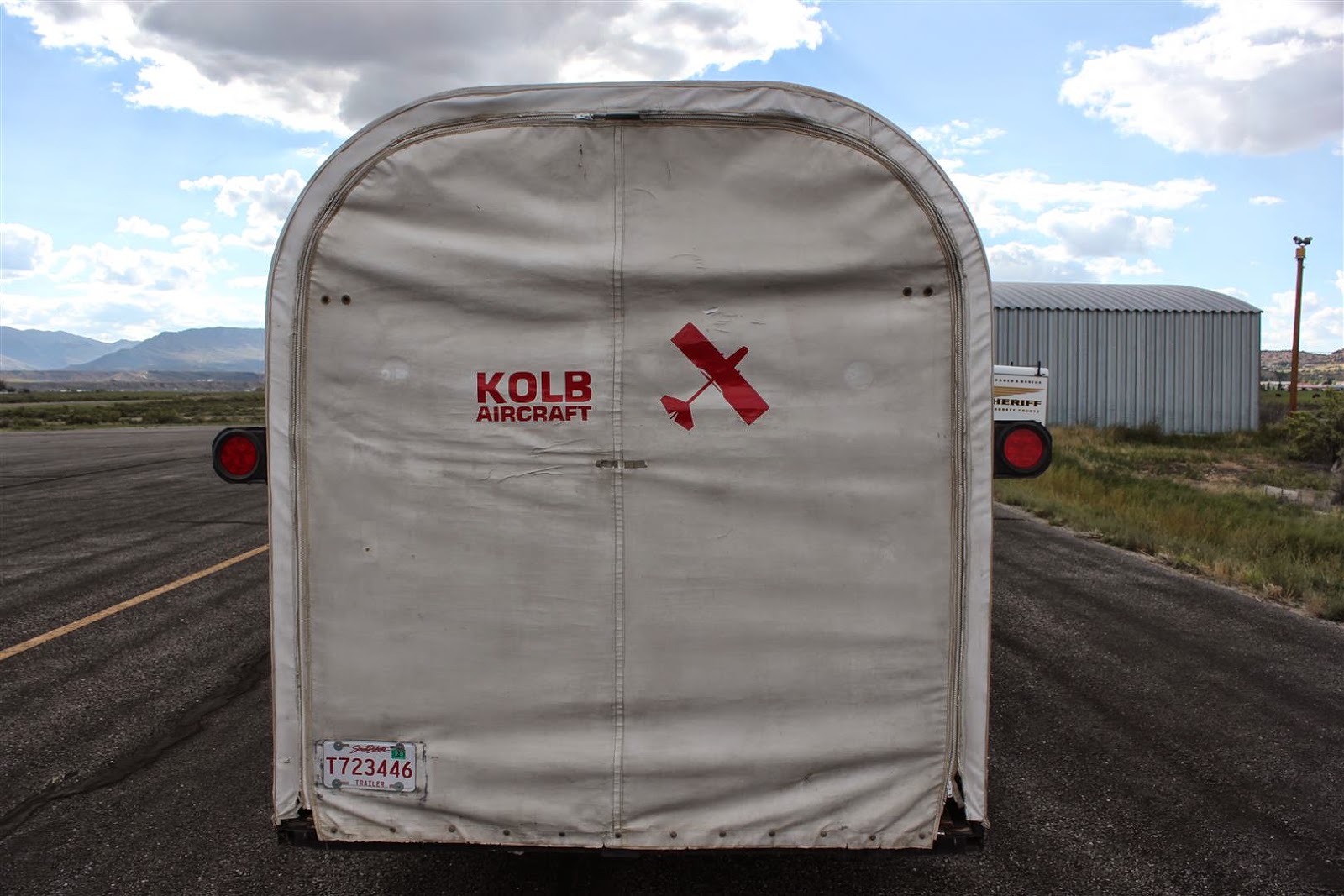